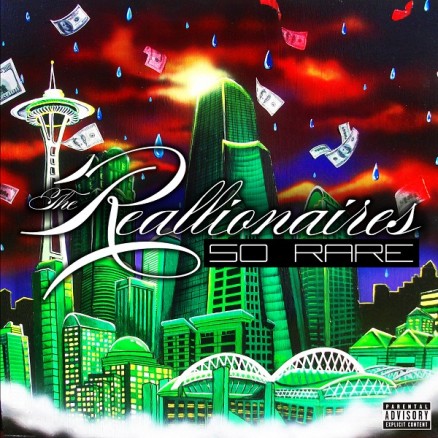 The age-old adage “they don’t make ‘em like they used to” is truer than ever, especially in the fly-by-night world of circa-right-now hiphop, especially if you listen to what passes for the radio these days; finding good, hard-hitting hiphop to slap out your stereo is like finding a needle in a haystack. Only right, then, that when West Coast (Seattle, WA to be specific) representatives The Reallionaires bring you a full-length album of just that, that they title it So Rare.

Representing game and good times at the top of the Fresh Coast, Scizza Hands and Produk make songs that bang in the clubs, the headphones, and the house parties; blending the Hennessey hedonism of kings like Dre and Quik with confident lyricism and smooth R&B, The Reallionaires make music for grown folks doing real thangs. From arrogant shit-talk and lady-killing swagger to down-to-earth humor and self-deprecation, they keep it every bit as real (and not just “real”) as their name implies. It’s relatable and accessible but never ever square or backpack— hard, but way too fun to be so-called gangster rap. It’s just classic West Coast—something to ride out with and smoke to: the track “High”, in fact, was already deemed “Best Rap Song” at the 2011 Marijuana Music Awards—not really a shock, since it was produced by Seattle veterano D-Sane, voted West Coast Producer of the Year at the last West Coast Music Awards.

Scizza’s pedigree as part of the celebrated Seattle crew 2Tyght (whose 1997 single “Let’s Get Toasted” was a certified NW smash) makes him the seasoned-to-perfection veteran of the crew, a master of in-the-booth versecraft in the vein of Jay-Z or Lil’ Wayne; balanced with Produk’s big baritone and major-league hooks make for a fresh sound with underground style and bigtime commercial appeal. On stage, their balanced two-man party is high-energy and dialed-in, getting crowds to put it in the air from here to where you stay at, with their potent hybrid of styles. From the bubbly-pouring VIP-booth rap of the bouncing “Pullin’ Me In” to the tender reminiscing of “Around Me”, The Reallionaires cover all the bases without breaking a sweat or ever sounding out of place. So Rare is truly made like they don’t make ‘em anymore, top flight rap music that feels like right now and sounds totally timeless.

So crack a copy of So Rare open, and slide that CD in your deck, slump it in your ride, copy it to your iTunes, slap it on your iPod earbuds. It’s simply straight-no-filler dope hip-hop music from a city not especially known for rap, the land where the steady rainfall makes for green trees, dope flows and big beats.